> Books and rules>World War II books>Stalingrad: The Death of the German Sixth Army on the Volga, 1942-1943 2 Vols
Reduced price! 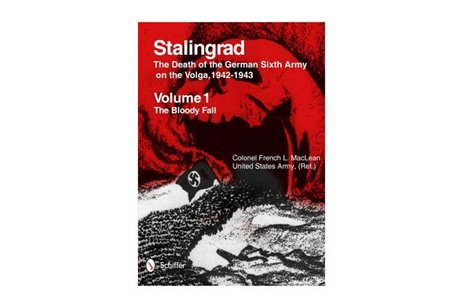 Stalingrad: The Death of the German Sixth Army on the Volga, 1942-1943: Volume 1: The Bloody Fall. Volume 2: The Brutal Winter by French MacLean.

The first volume starts on 15 august 1942 (when Sixth army reached Don River N Kalach) and ends on 31 October 1942, while the second one covers the remaining period.
After introduction, the main text offers a strictly chronological format, a day-by-day presentation, what the units of the Sixth Army were doing (disposition, casualties, neighbors etc) from 15 august 1942 to the final surrender on 2 February 1943.
Each day starts with light and weather data and ends with sources of the information.

The study is well-crafted and edited in a two-volume set inserted in a black handy binder.
I was very impressed by the numerous remembrance/death cards or letters home from the German soldiers, obviously included to present a human-interest side.
A short chapter deals with casualties sustained by Sixth Army and their allies, with a focus on POWs fate and number, followed by an epilogue. There are many color maps and photos of Stalingrad area and 4 appendices.
I see appendix 4 (“Sixth army report of autopsy”) as a short and interesting conclusion of this study.

23 other products in the same category: